Well it dawned on me today that several high profile issues are in the air. Two of which I wanted to talk about today:

It could have just been both offline & online
Always online seems to be a rather interesting idea when it comes to games that don't use online worlds or instances (MMO type games). For instance, SimCity, which has caused a bit of a fuss between my brothers and I.
We are all in agreement that the forced element of the game play does nothing to help us enjoy the game. In fact, I have to design several cities in a region to make up for the fact that my city alone does not have the financial power to have all the city hall buildings as well as the other necessary utilities that are required of a growing community.

If I could have a larger city space, with adjusted prices/maintenance costs I could play myself (online or not), I wouldn't be dependant on other people to have fun. Otherwise, my cities are just losing steam as I reach that boundary of what I can achieve alone. Which inevitably leads me to not play the game I paid for. Plenty of online games allow me to continue playing without other people. Most of the game is still available to me. There are certain challenges I can not face, but there are plenty that I can.

Its the choice I am offered that allows me to continue enjoying my time, the choice that I do not have in SimCity. I have to have a second or third city, when frankly its only going to be there to give me city hall enhancements, not fun. 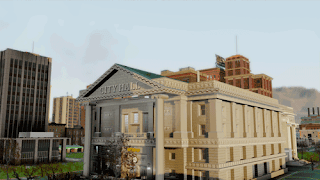 Advertising on my Xbox 360 has pushed me so far away from the console, I barely touch it. Accidentally moving over the obnoxious advert, for a product I have no interest in, results in loud tag lines and other non-sense being pushed into my brain. You might argue that just having the logo on your screen, even if it is not the focus of your attention, still subliminally brings those companies or products into your awareness. Which is equally lovely.

If that is what the Xbox 360 was like when I bought it, then fair play. But I bought it when it was this great games console that seemed to be sleek and efficient. Allowed me to play games like Fallout 3, get silly achievements & it just felt like the whole package. The dashboard changes really have spoilt that & I just would like it to go back to the way it was.
Its even more insulting that Gold membership doesn't free you from the adverts! How much money do I have to pay to get the dashboard back?

Simcity has also turned to advertising in the form of the electric car charging station for a certain car manufacturer. My main issue with this particular advert is that the charge station is imbalanced in comparison to other happiness creating buildings and the only reason not to use it, is simple as a protest, which I am sure EA couldn't care less about.

I won't speculate as to why companies want to use these tools, as frankly that does little good. I am sure me having a bit of a bash doesn't help much either. It's just how I feel these changes to products have negatively impacted my experience as a customer & made a game or access games less fun.
Posted by Unknown at 6:52 pm
Email ThisBlogThis!Share to TwitterShare to FacebookShare to Pinterest